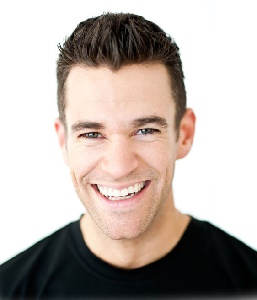 June 26, 2018 – LAS VEGAS – Celebrity Entertainer Jeff Civillico, best known as an award-winning comedic entertainer on the famed Las Vegas Strip for more than a decade has been named “Ambassador” for Las Vegas Natural History Museum, announced Museum officials today. This is the first-time in the 27-year history of the Museum that a celebrity has partnered with the Museum to further rally local and national recognition for the Museum and its current growth and expansion.

“When our team first met Jeff, we knew he was the perfect match to embrace and spread our message on education, science, archaeological discovery and the preservation of fossils and rich history found in our immediate surroundings,” said Las Vegas Natural History Museum Founder/Executive Director, Marilyn Gillespie. “We share the same family audience and passion for Nevada history as Jeff.  With so much expansion and growth currently happening at the Museum, we believe it is perfect timing for Jeff to join forces with us and to help publicize all that we are accomplishing and creating at the Museum.  His enthusiasm is infectious, and we are so excited to have him be an intricate part of our team,” Gillespie said.

“I am a naturally curious person, and enjoy discovering new tidbits about my home here in Las Vegas. When I saw what the Las Vegas Natural History Museum was doing, I knew I had to be a part of it,” said Jeff Civillico, Las Vegas headline performer. “I have been a family-friendly entertainer for my entire life, and love seeing people from all walks of life and all age groups enjoy my show. Blending my natural interests in science, discovery, and history with a family environment that is a showcase for Las Vegas and inspiring for kids—all in a way that is both intellectual and fun—is a perfect combination,” he said.

“Civillico’s role will include being the celebrity ambassador for LVNHM in marketing, special events, corporate development and special programming,” Gillespie said.

The Las Vegas Natural History Museum opened in 1991 and is a private, non–profit institution dedicated to educating children, adults, and families in the natural sciences, both past and present. Through its interactive exhibits, educational programs, and the preservation of its collections, the Museum strives to instill an understanding and appreciation of the world’s wildlife, ecosystems, and cultures.

Jeff Civillico:
Jeff Civillico is a Las Vegas Headliner, TV Host Personality and Philanthropist. He has been a Las Vegas Headline Performer with Caesars Entertainment for the past eight years, having performed 1000+ shows at The LINQ, The Flamingo, and now The Paris Hotel & Casino. His Las Vegas show – “Jeff Civillico: Comedy in Action” is highly acclaimed, having been named “Best of Las Vegas” 3 years in a row by the Las Vegas Review-Journal, one of the “Top 10 Things To Do In Vegas” by Total Vegas Guide, #1 place to “Kick it with the Kids in Vegas” by Las Vegas Magazine and “Cultural Advocate / Entertainer of the Year” by Vegas Inc., among others.  His show is consistently popular among both tourists and Vegas insiders, with 5-star ratings on Ticketmaster, Yelp, etc.

When Civillico is not on stage, he’s on camera—hosting everything from Las Vegas ABC Morning Show “The Morning Blend” to special events and galas in and around the Las Vegas area. Civillico is also the Founder & Chairman of Win-Win Entertainment, a 501c3 non-profit that connects performers with direct volunteer opportunities to entertain hospital patients, seniors, servicemen and women, and those with special needs. After arranging 200+ charity shows in 2015, Win-Win Entertainment began its national expansion with chapters now operating in Salt Lake City and Minneapolis, in addition to Las Vegas. Civillico currently serves on the board of several organizations including the alumni board of his alma mater Georgetown University, Las Vegas Academy of the Arts high school, and The Greater Good Council of Las Vegas. Now, Civillico will become the inaugural celebrity spokesman for the accredited Las Vegas Natural History Museum.

Jeff Civillico is a Las Vegas Headliner & Producer, a Corporate Event Performer, and a Television Host Personality.  The youngest headliner on the Las Vegas Strip, he performs his “Comedy in Action” show

« Received Career Advice? Pause, And Consider Your Source, Underclassmen In The NFL Draft by Don Yaeger, Leadership Speaker
What Blockchain Means for Marketers and Advertisers by Kelly McDonald, Marketing Speaker »
This site uses cookies to enhance site navigation, analyze usage, improve functionality, and better your experience on the site. By continuing to browse the site, you consent to our use of cookies. Please see our Cookie Policy for more information about our use of cookies. Accept
Privacy & Cookies Policy
Necessary Always Enabled
Non-necessary