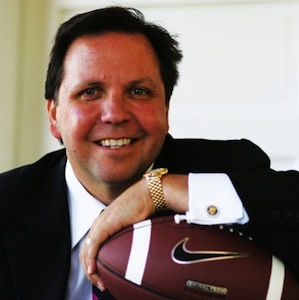 I get it.  I probably (ok, certainly) won’t hear my name called among the 250+ players picked during the 2018 NFL Draft on April 26-28.  Sadly, there are countless others who have written this letter to Roger Goodell that are in the same boat as me – they won’t hear their name either.

But don’t think I’m stopping there. Before the week is out I’m writing Adam Silver (NBA), Rob Manfred (MLB), Gary Bettman (NHL) and even Ethan Sturm (Major League Quidditch) letting them know I officially announce my eligibility for their leagues and associations, as well! Does this sound silly?  Yes, it does.  And it is.  But, how big of a difference is it for me to make this type of declaration compared to some of the other underclassmen that do so every season?  Every year we see athletes (in all sports) announce their availability for their professional draft.  And every year there are scores of players that force us to scratch our head trying to figure out how this person felt that they were prepared to take that next step.  When the final name of the draft is on the lips of the commissioner, those athletes are the ones almost always holding their breath, just praying their name is the one called.  It won’t be and now these players can no longer go back to playing collegiate sports and are often left without a job entirely.

Yes, you can make the argument that college sports is a bad deal for the “unpaid” labor.  Many have.  Players can stay around for up to five seasons “earning” room, board and books while coaches rake in the dough.  The students aren’t always getting a true education due to the random easy courses that the schools are putting on their schedule to balance the grind college sports requires.  On the flip side, is one more year of being coached well and maturing physically and mentally better than leaving early… and ultimately being left unemployed?

This isn’t an uncommon occurrence. In fact, it happened to more than two dozen underclassmen in last year’s NFL draft alone.

Right here in my own hometown, I recently read a story in the local newspaper about a young man (a redshirt sophomore) who wasn’t even a starter for the Florida State football program.  He was a backup defensive end that initially committed to the Seminoles as a tight end.  I have to imagine that there wasn’t a single scout that had him on their radar.  Yet, someone whispered in his ear and told him that he should consider the NFL Draft.  His name is Jalen Wilkerson.

Wilkerson and I will both be sitting on the couch the week of the draft and both of our names won’t be called.  It’s a sad truth.  However, it occurs much more often than we realize.

So why do players like Jalen Wilkerson make this decision?  Why do they think they are ready when those who “hire” in their field obviously know they are not?

The challenge is often that those players have people whispering in their ears, telling them stories of worthiness we all want to hear.  People, many with their own agenda, were pushing them to make an unwise decision.

I can’t speak to the specifics of Wilkerson or many of the others who believed they were NFL-ready, but were passed over.  On the surface, no two circumstances are the same.  But I’ve worked with enough players to know how intoxicating it is when people tell you what you want to hear.  When it turns out not to be true, those same “whisperers” are nowhere to be found.

That said, I think the message here is a pretty simple one for all of us…even if you haven’t declared for the NFL draft: As you consider your next professional move, beware the motives of people whispering in your ear.  Are they engaging with you for your best interest or theirs?  Once you’ve asked that question, pause.  Just pause as those people are whispering. An honest look at the situation might allow you to make a different, and better decision.  The decision can and will have a major impact on the rest of your life.

For more information or to book Don Yaeger to speak at your event, click here.

As an award-winning keynote speaker, business leadership coach, a seven-time New York Times Best-selling author and longtime Associate Editor for Sports Illustrated, Don Yaeger has fashioned a career as one of America’s most provocative thought leaders. As a speaker, he has worked with audiences as diverse as Fortune 500 companies and cancer survivor groups, where he shares his personal story.

He is primarily sought to discuss lessons on achieving greatness, learned from first-hand experiences with some of the greatest sports legends in the world. Additionally, Don has been retained by companies and organizations to coach their leaders, management teams and employees on building a culture of greatness by looking at Great Teams in sports and discerning the business lessons we can learn from them. Throughout his writing career, Don has developed a reputation as a world-class storyteller and has been invited as a guest to every major talk show – from Oprah to Nightline, from CNN to Good Morning America.

As an award-winning keynote speaker, business leadership coach, a seven-time New York Times Best-selling author and longtime Associate Editor for Sports Illustrated, Don Yaeger has fashioned a career as one of America’s most provocative thought

« This Is the Only Way You’ll Get An Angry Customer to Calm Down by Myra Golden, Customer Service Speaker
Jeff Civillico Named Celebrity Ambassador for Las Vegas Natural History Museum »
This site uses cookies to enhance site navigation, analyze usage, improve functionality, and better your experience on the site. By continuing to browse the site, you consent to our use of cookies. Please see our Cookie Policy for more information about our use of cookies. Accept
Privacy & Cookies Policy
Necessary Always Enabled
Non-necessary